Snake bites are no minor problem, but some snake bites are more dangerous than others. You should look up what kinds of snakes are in your area and which are venomous or not.

When you get a snake bite by any snake, you should see a doctor. However, if you are bitten by a nonvenomous snake then you can take some measures to clean out the wound and prevent infection before you see a doctor.

Luckily, non-venomous snake bites are not all that dangerous; you can practically walk away from them after cleaning out the wound and putting on a bandage. However, sometimes there are complications, and that’s why you should see a doctor even if you are bitten by a non-venomous snake. This section of the article will explain how to properly clean a snakebite so that you can avoid getting an infection. After you follow these five steps, see a doctor to get your snake bite properly inspected.

The first home remedy you should do when you get a snake bite is to stop the bleeding. If you are bitten by a small snake, then this shouldn’t be a problem. If your wound is not very deep them you can take care of it yourself at first. One way to stop the bleeding is to apply pressure to your wound. Keep pressure on the wound for at least ten minutes. If your bleeding stops within the ten minutes, then you can continue onto step two. If you are still bleeding even after ten minutes of pressure, then you should see a doctor as soon as possible.

After you stop bleeding, make sure to clean out your wound. It is likely that there is not much in it, but you never know what kind of germs a snake might be carrying; also you may have gotten dirt or other debris in the wound as well. One easy natural remedy to clean out a wound is to run it under water (warm or cold) and also use antibacterial soap to clean it out as well. This should be able to clean out the wound fairly well.

Once you are down cleaning out your snake bite wound you can apply a small layer of aloe vera gel. Aloe vera gel can help to prevent infection and ease the swelling if there is any. Like rubbing alcohol, you should only use aloe vera gel if you have a shallow wound; aloe vera can also make deep wounds take longer to heal. If you do not have any aloe vera gel, then it would be wise to at least put on some other kind of antibiotic cream.

Once you apply the aloe vera gel, or any other antibiotic cream, on your wound it is important to bandage yourself up. Use a large wrap-around bandage even if your wound is not large. Do not tie it around you so that it is so tight that it will cut off circulation. Once you have bandaged your wound, see a doctor to make sure that there are no complications.

If you know that you have been bitten by a venomous snake, then the first thing you should do is call someone for help. Depending on the snake, the venom can start making it’s way through your body right away and causing side effects, or it could take hours for symptoms to show. Either way, it is important to get medical help as soon as possible. 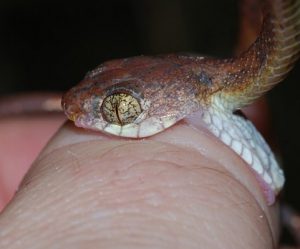 One myth about snake bites is that it’s a great idea to suck out the venom so that it cannot damage your body as much as it would if you did not suck it out. However, if you were to have someone else suck out the venom, then it could make the other person sick as well. If the person has a cut in their mouth then the venom could enter their blood stream as well, putting both people in danger. Just leave your wound as it is until a doctor can treat it.

For some reason some people think it’s a good idea to cut the skin around their snake bite. For whatever people would want to do this, it’s not a good idea. It is best not to damage yourself any more after the snake has already hurt you. Cutting yourself open will only put you in more pain and you’ll also be bleeding, which could be hard to stop. Don’t damage your skin anymore than it is already damaged.

Cutting off circulation won’t stop the venom from getting into your bloodstream. If you’ve been bitten by a venomous snake, then it is likely that there is already venom in your bloodstream seconds after the snake bites you. What you should do, instead of tying off the limb, is loosely apply a large bandage and keep your limb straight. For instance, if you are bitten in the leg, try to lay down and keep your leg straight. You might want to use some wood or other straight objects as a sort of splint. Wrap a bandage around your wound and over the splint so that nothing gets in the wound and so your leg will have a better time staying straight.

Although it may seem like a good idea to apply ice, it’s really no good at all. If you were to put ice or a cold pack directly onto a snake bite it would only make the area around your bite-wound more numb, and it’s possible that you could kill cells that are trying to heal your body. At most, all the ice would do is lessen the swelling, but really, it’s not worth it. Avoid putting ice or any other cold item on your snake bite wound.