Today we will talk about the health benefits of barley for our body. Many people don’t know that adding barley to your diet can help with a variety of health problems. Here are a few advantages we are going to go over to help spark some interest in this barley super food.

Why You Should Eat Barley?

Barley can help to control your blood sugar levels. A recent study suggests that those who participated in a diet with barley are 30% more likely to have better insulin sensitivity in their bodies. Why does that matter? Diabetes for one, but also you don’t want high sugar levels as this can lead to weight gain.

Barley can lower glucose levels, for example, white rice is a staple in areas of Japan and is considered a high glycemic index food. Researchers found that if you switch one meal with barley instead of rice that people had a lower glucose level the very next day.

Barley can help to reduce your blood pressure, a recent study found those who participated and consumed a food group in the whole grains category and that had either a high amount of soluble or insoluble fiber had reduced blood pressure and cholesterol levels at the end of the 5-week study.

Barley can lower your glycemic index. A study took 8 healthy people and fed them breads made with barley and did a number of tests and were amazed to find that those who had bread with 4 grams or more of barley content in them had lower glycemic indexes.

Barley can beat oats when it comes to your glucose response. A group of overweight women were fed a variety of breakfast foods from oats to barley and the study found that those who had barley had a significantly lower glucose level than those who had consumed something else like oats or wheat foods. 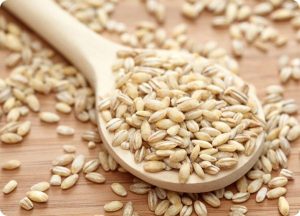 Barley can help you to manage your weight, due to its slow digestion like oats or other whole grains; it keeps you full longer and doesn’t require a lot to do so. Barley is suggested for those of us who are either overweight or on diabetes-related diet.

Barley could help you to keep your blood sugar levels at a decent level while you’re digesting the barley and keep you feeling full for a longer period of time which will result in you not over consuming other foods.

Barley is truly a superfood with the number of things that it has been proven to aid or do. These are just a few of what barley is able to do for you today.

So if you’re overweight, have diabetes or are just a health conscious person you may want to think about trading in some of those other whole grains for some barley in order to get the added health benefits from this superfood.

It is suggested that you don’t go all out all of the sudden, but instead transition yourself into a diet with barley and let it do all the work for you.