Both dry and wet Beriberi is spurred on by the consumption of excessive amounts of alcohol and mostly occurs in people who battle with alcoholism.A healthy meal plan comprising of foods which contain high thiamine such as beans and whole grains reduces one’s chances of developing beriberi.

All forms of tingling and pain or the loss of feeling in hands and feet are commonly categorized as symptoms of dry beriberi. Other more drastic symptoms include muscle wasting, forms of paralysis, and brain damage scenarios.

Beriberi is no longer a prominent sickness in the United States as most foods that we eat of late are vitamin-enriched meaning our daily diets are packed with sufficient thiamine. Therefore, lately, the main sufferers of beriberi are alcohol abusers. This is because drinking in excess leads to malnutrition and weak absorption and storage of thiamine. This eventually causes Wernicke-Korsakoff syndrome,  which in turn, affects language and thinking.

Patients who are undergoing dialysis may be at a risk of contracting beriberi, along with patients who are receiving large doses of diuretics. Other persons at risk include those in developing countries who have very limited diets and who eat a lot of milled rice.

Most breakfast cereals are filled almost 100%  of a person’s recommended thiamine intake, and this is a great dietary treat. Read the nutrition label on cereal boxes to see if a specific brand or cereal type has thiamine in it.

Wheat Germ has been named one of the best remedies for beriberi. This natural ingredient is packed with nutrition. As a healthy cereal, a wheat cereal is an excellent cure for beriberi.Wheat germ cereal can be made by mixing about 120 grams of wheat germ with an equal measure of milk. This mixture should be boiled and acts as a perfect solution of beriberi. Patients should drink the wheat germ solution once daily for a month in order to ensure a speedy recovery.

The vitamins and mineral nutrients contained in milk help in the lowering of beriberi disease. Making it a habit to drink at least two glasses of pure milk daily in the morning and evening can act as a home remedy for Beriberi. Milk is just as beneficial when it is disguised in milkshakes or in yogurt.

Boiled soybeans contain vitamins and minerals that can fight one’s beriberi disease, allowing one to efficiently recover from this condition. The best way to enjoy this beriberi remedying diet is to eat tofu or drink soy milk. Soy is a major ingredient in both of these products.

Legumes have thiamine on its outer covering, and hence can be used to cure beriberi. Preparing regular meals with legumes, nuts, and seeds can be beneficial. Try to add at least one of these foods into your diet on a daily basis to achieve the best results.

Brussels sprouts provide Vitamin C, as well as refurbish the body with ascorbic acid that is positive for the treatment of beriberi. Eat a serving of raw brussel sprouts at least twice a week.

Sunflower seeds have gained recognition due to their miraculous healing properties. With their antioxidant and anti-inflammatory properties,  it has worked in providing relief for a vast array of diseases and disorders. Sunflower seeds are rich in vitamins A, B1, B5, and B6. They also contain tannins, selenium, zinc, amino acids, and omega 3 fatty acids. It is best to eat one to two teaspoons of sunflower seeds every morning to maintain an adequate thiamine amount in the body. 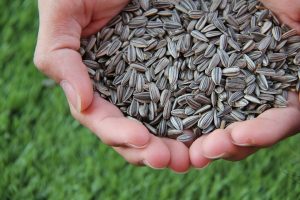 Peanuts are comprised of thiamine and proteins. They are rich in fats although they are effective in reducing the risk of contracting cardiovascular diseases. Peanuts are best enjoyed when they are soaked overnight only to be thoroughly enjoyed the next morning. You can also receive similar health benefits by eating two spoonfuls of peanut butter every day.

Bell pepper is a source of vitamin C. Yellow peppers having the most content of vitamin C, followed by red pepper, and thereafter green pepper. Add bell peppers to your meals as often as you like to reduce the symptoms of beriberi.

Black peppercorns include the B-complex groups of vitamins including Riboflavin, pyridoxine, niacin, and thiamin. They also contain antioxidant vitamins such as vitamin-A and vitamin C. Minerals like zinc, manganese, potassium, calcium, magnesium, and iron are also found in black pepper. Black peppers minerals and vitamins assists in decreasing the spread of beriberi. Add pepper to your meals to ease the symptoms of beriberi.

The use of mango is regarded as a remedy when the powder is carefully formulated using the core of the raw mango. This inner crust is allowed to expel moisture by placing it under the sun before it is blended to a powder. Just a mere teaspoon serving of this remedy should be taken before every meal to be a potent cure for beriberi. 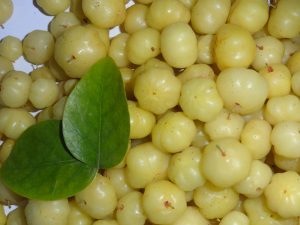 Pineapple is rich in potassium, magnesium, manganese fiber, copper, calcium, and vitamin C. It is also known for containing valuable amounts of thiamine and vitamin B6. Nutrients such as these are sure to maintain the health of the bones and the muscles whilst entailing the nervous system to function properly. Eating a sufficient amount of the fresh fruit can ensure that thiamine deficiency will be restored rather quickly.

Strawberries are but another fruit that is full of Vitamin C content in appreciable proportion. This fruit has been labeled a beriberi cure. Try to eat strawberries as often as possible to benefit from this home remedy suggestion.

Kiwi fruit is rich in Vitamin C. These fruits should be essential in one’s daily diet. Eat them as often as you like to cure your beriberi.

Fruits like papaya are also a source of vitamin C, so the use of papaya is essential in attempting to cure beriberi. Like all of the other fruits mentioned that can help with beriberi, eat this fruit as often as you like. This should reduce the symptoms of beriberi.

In wood apples,  we find a high level of oxalic and tannic acid.  Wood apple pulp is thus an efficient cure for Beriberi. You can either eat wood apples or drink cider or juice made from wood apples to benefit from this home remedy suggestion.

Oysters prove to be beneficial for bones, muscles, and overall health. They act in ensuring the healthy functioning of all bodily organs, keeping the nervous system in an excellent condition. They are fat-free and oyster calories are valuable in proteins and thiamine. Indulging in more oysters daily is a fantastic way to naturally supplement the body with thiamine.

Even though oysters are rich in thiamine, shellfish, clams, mussels, shrimps, and raw tissue of animals contain an enzyme thiaminase, which instead of increasing thiamine in the body causes thiamine to break down. Beriberi sufferers should avoid eating fish in order to keep the remaining vitamin B1 in the body. However, eating fish is a great home remedy for many other health problems.

Just like strawberries and the other fruits listed in this article, oranges contain ascorbic acid and are a natural cure for beriberi. Eat an orange or drink a glass of 100% orange juice at least once a day to benefit from this home remedy.

Brown rice, unlike milled rice, is a vital source of thiamine. Try to eat brown rice at least twice a week until your beriberi is cured. 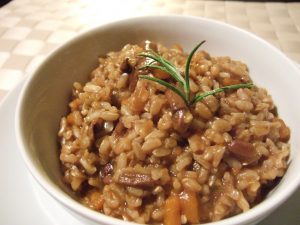 Meal made with brown rice

Rice bran is the drained water wherein the rice was previously boiled in.  This water is full of healthy vitamins which are also contained in rice. Thiamine is ever present in this water so if patients drink this water regularly they can easily be cured of beriberi.

Thyme contains vitamin C and ought to be used in the preparation of medications that can be used as beriberi treatment.You can also obtain health benefits from thyme by using it in your daily meals.

Parsley, alongside thyme, contains Vitamin C and is most prominently in medications used for the treatment of beriberi. Like thyme, you can use parsley by adding it to your meals. It tastes especially great when used in soups and in potato dishes.

Aloe Vera consists of vitamins  A, C, E, choline, folic acid, B1, B2, B3 (niacin), B6, and vitamin B12. It also contains minerals including calcium, zinc, magnesium, selenium, chromium, iron, sodium, copper, potassium, and manganese that can assist in the battle against beriberi.

Alagau is a rich source of Vitamin B1. The herb has leaves that are used for curing coughs and phlegm. With alagau, beriberi can also be easily cured. In order for alagau to work, three or four leaves can be boiled prior to drinking it. This supplement must be taken twice a day for a month.

Chives are herbs consisting of vitamins A, C, and K that can act as a barrier against beriberi in the body.  Half a glass of chive juice can be used to cover affected areas. After applying chive juice to an area for at least an hour, the area can be rinsed out. You can also benefit from chives by simply adding this herb to your daily meals.

The best beriberi solution includes slices of ginger-spiced with salt. The mixture should be boiled in water. Regular foot bath with this solution provides wonderful relief from the pain caused due to beriberi.

While many juices like chive juice help with beriberi prevention, it is advisable not to drink in excess after eating. Vitamin B1 is a water-soluble compound that gets drained out of the body if too much liquid is drunk after meals.